I have been made aware today that some people believe the cause of M.E is known and that sufferers know what their prognosis is. I disagree. This blog will explain and clarify my standpoint. 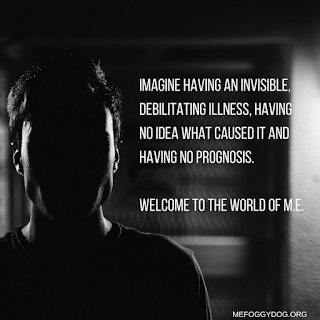 gets ill....very ill (as happened to me). Tracey's simple ear infection had triggered a debilitating chronic illness. Until we know the reason behind the two different outcomes, we don't know the cause of M.E. I run with the notion that there is something dormant within us, perhaps in our DNA or gut, that is activated/triggered by a virus, trauma, etc. But researchers have not established what that 'thing' is yet.

At the beginning of this blog, I wrote 'my latest bout' - this is my second bout of M.E. I had (undiagnosed) M.E in my teenage years. I became ill virtually overnight (we have never worked out what the trigger was) and it left just as quickly 2 years later. It is due to my first bout that I believe many of us don't have a prognosis. I have no idea if this second bout is lifelong or if it will vanish as quickly as the first bout many years ago. It's a mystery!

This is what the M.E Association say about prognosis - www.meassociation.org.uk

What are the chances of recovering from ME/CFS?

Most people with ME/CFS fall into one of four broad groups:
Using the above as a guide, I have no idea if I am in the first or second group. I may get better or I may not. I am now 11 years into this second bout with no signs of getting better. Symptoms are ebbing and flowing, some have improved whilst others have got slightly worse. My cognitive function has deteriorated over the past 6 months. I am hoping it is just temporary. I have spoken to a few other sufferers who are experiencing the same fluctuation in cognitive function so I know I am not alone in that.

It is true that severe M.E sufferers have a greater sense of prognosis (see group 3) but mild/moderate sufferers like myself don't have any idea of what is in store for us. We have no idea if our, occasional, slightly improved health means we are 'recovering' or if it is simply a fluctuation.

I hope that clears that up and, despite a few followers disagreeing with me, I will continue to promote that we do not know the cause or our prognosis, until I see definitive proof to the contrary.