It has not exactly been 'restful'!

Foggy is enjoying his well-earned break in Foggy HQ and while he is snoring I thought I'd write this blog to tell you how I have been health-wise to since the last campaign ended.

My 'vertigo' lasted 3 and a half months before it was finally diagnosed as chronic migraines. Which is EXACTLY what happened at the start of my M.E experience. So, after a few weeks of beta-blockers, my symptoms eased and I was able to get back to living my life. However, my body had different plans!

One week after my dizziness stopped, I travelled to Surrey for a much needed catch up/girl's
weekend. I had paced myself to make sure I was fit and well (ha!) for the drive and arrived there excited for the weekend ahead. We had a glass of wine while we were getting ready to go out on the town, ordered a taxi and headed down the stairs. Da da dahhhhhhh, I fell down the last 3 steps and landed on all fours on HARD laminated flooring. My friend, who is a nurse, was concerned and asked if I was ok, I assured her that I was. Purely because it had been so long since my last night out (probably about 9 months), I was determined to go out come hell or high water. At that point, my legs/feet had gone numb and I wasn't in pain. I was wearing heels..... we ventured out to local pubs. My mentality was to grit my teeth, hobble and get on with having a good time. Unfortunately for me, a couple of pubs had wooden floors and my, now very unstable ankles, didn't want to keep me upright. I slipped at least 3 times. As the drinks flowed more and more I started to find my clumsiness funny....I didn't laugh for long!

We ended up dancing in a club at about 11pm. I kept attempting to dance and lost count of the number of times I slipped. Thank goodness for low-level sofas breaking my fall as I toppled backwards! Luckily (?), the alcohol was acting as a kind of anaesthetic and the pain, at that point, wasn't overwhelming. However, one last stop at the bar to buy drinks put an end to the evening's frivolity. Someone had spilled drink on the floor and I slipped AGAIN, this time my, already weakened, ankle was wrenched sideways. My friend realised that I had reached my limit and bundled me outside. 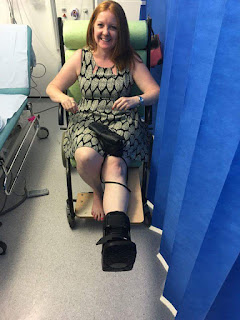 imagine what we looked like!) and checked my foot over. A consultant friend said he would drive us to A&E to be checked over. So off we went.... 6 hours later.....
I was told I had a badly sprained ankle that would take 6 weeks to heal. However, subsequent consultants have said I chipped 3 pieces of bone off the top of my foot. I am 100% sure that I have internal broken bones but as the treatment would be the same it makes no odds now.

Anyway, I wanted to use this blog to show how M.E affects the healing process. I had my accident at the end of July and am still healing. I saw a physio consultant a month ago and I mentioned that I do M.E advocacy and asked her if me having M.E is the reason healing was taking so long. She said probably, but that there was no specific research to draw on. She said that using common sense and knowing a bit about the condition would lead her to say that it was the reason it was taking so long. Purely because M.E slows everything down and so something that would usually heal in 6 weeks could take up to 3 times longer in an M.E patient. I am currently doing hydrotherapy to try and build my muscle strength and balance but, as I didn't have good balance before the accident, I am not sure how they will gauge my progress!

While all this has been going on I have also been experiencing double vision. Now, this could 'just' be a symptom of M.E. but I went to the opticians to get it checked. they sent me for an emergency eye appointment. After a Saturday afternoon full of eye tests, the consultant said he believed my beta-blockers, which I was taking for my Migraines, were weakening the muscles in my eyes, making focusing my eyes more difficult and slower. He believed that drug sensitivity (a M.E symptom) was the cause.  He said 'what would you rather have? Migraines or very temporary double vision?'. Oooh, I get to choose?! I have decided to come off the beta-blockers as I don't like flooding my body with drugs. So, now it's a case of wait and see. I'll have to decide what action to take if the dizziness/migraines return...if they ever do.

I had planned on taking time out from Foggy to de-stress and sort my own life out but my efforts have been massively limited due to being on crutches for 10 weeks (VERY TIRING!). I still can't drive or walk far. As I type this I have an ice-pack on my foot as walking today has made my foot swell up again.

M.E affects all systems and aspects of bodies and our bodies don't stick to the medical profession's timetable. I think it's also evident that medication for M.E symptoms can lead to other problems that can also be confused with M.E symptoms.

The biggest drawback? I had to wear flat shoes to my 40th birthday party! #badtiming!

Happy birthday to me :)